I arrived first thing on Monday. Sneaking in was very easy, because there was a free tour of the building fifteen times a day. My tour guide said “If you’ve got any questions during the tour, please don’t hesitate to ask.” I took this as my opportunity to find out some information, and so I asked “Which presidents are on all the bills?” He said that he wasn’t sure. He knew that Lincoln was on a $5 or $10 note, but he’d have to check.

I was led into a room two and a half miles beneath the ground where an old man sat alone, stacks of paper on his desk and a permanent marker pen in his hand.

“I can see you’re very busy, so I won’t take up much of your time.” I said, watching him draw the dollar sign on a half completed $1 bill. “I’ve just come to find out which presidents are on the different bills.” Without looking up at me, he slid open the top drawer of his desk and pulled out a book called “Everything You’ve Ever Wanted To Know About Who Is On The Dollar Bills and Why”.

“Thanks.” I said, lifting the heavy book and placing it in my bag.

As I began to leave the room I realised I’d probably never meet this man again, and so, I decided to pitch him an idea I’d long been holding.

“Have you ever thought about making a ninety-nine cent note to save on change? You know, for things that cost $1.99 and that?” He stopped drawing. Looking up at me, as he took off his glasses, he said:

“Really?” I asked, wondering if he was being sarcastic and his American accent was terrible at it.

“Wow” I said. “Which president are you going to put on it?”

His reply was a long and boring one, to tell it in full detail would only send you to sleep as it almost did to me. To cut a long story short he had taken this job thirty nine years ago. Fresh out of college with a degree in Arts and Crafts, he needed to earn a quick buck. He dreamed of becoming a comic book artist, but nobody was hiring. One morning he opened the newspaper to see the words “Artist? Want to make a lot of money?” written in dark bold lettering. The rest I’m sure you can work out yourself.

For the first time in thirty nine years he was confronted with chance to draw something other than a dead president.

“Son, stay here while I draft something up.”

An hour passed, an hour in which I read the first seventy-five pages of a book called “Everything You’ve Ever Wanted To Know About Who Is On The Dollar Bills and Why”, but still I was only able find out that George Washington was on the one dollar bill.

“Well, here it is” he said, beckoning me over to his desk. There I saw the world’s first ninety-nine cent bill. Unsure of what to make of it, I asked:

“Are you please with it?”

“For the first time in nearly four decades I’ve drawn something from my heart. I know happiness and job fulfilment I’ve only dreamed of.” A smile as wide as Kansas crossed his face. “Now I can die a happy man.” He was dead.

Worrying that I could somehow get the blame for this, I grabbed the 99c note and ran back to the first floor. I returned home on Monday evening, having had enough hours on the flight to complete the book “Everything You’ve Ever Wanted To Know About Who Is On The Dollar Bills and Why” and learn everything I’d set out to discover. The first and last 99c dollar was just a happy bonus. Here it is: 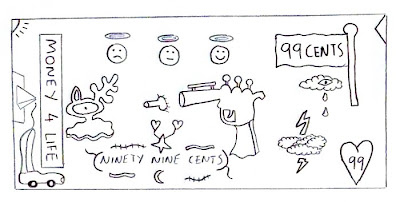